At the age of 8, I inherited a bass from my uncle, who died tragically in a motorcycle accident in San Leandro, CA. My parents then relocated to Bellevue, Washington where I acquired a nylon acoustic from an aunt and began listening to my father’s vast record collection. My early influences were The Beatles, The Rolling Stones, Jimi Hendrix, Mountain, The Allman Brothers, Bob Dylan, Lou Reed and the San Francisco scene. Having a love for the bass I learned the notes and a few scales and began emulating some of my favorite tunes. I figured out how to hook into my father’s receiver and get a really distorted fuzzy sound. I began to learn some Mountain songs and played until I blew up my father’s speakers; he was not amused. So I convinced my parents to UPS my uncle’s Fender Bassman and speaker cabinet. That became my amp all the way through high school.

While in junior high school I sent away for a mail order Les Paul copy and a fuzz box. I also bought a guitar book and began learning the basics. I began playing bass in some garage bands and soon took over the guitar position because I could play Zeppelin tunes. In high school, I started to listen to hard rock; bands like Judas Priest, UFO, Iron Maiden, and Van Halen and began practicing a minimum of 2 hours a day. Then, I met Chris DeGarmo and the two of us played in several garage bands, most notably Joker and Crossfire.

After high school, I attended the Cornish College of the Arts in Seattle where my studies included jazz and classical music, and where I learned to appreciate ethnic and improvisational music. Chris and I then met Scott Rockenfield and Eddie Jackson, and began collaborating on original music as well as some heavy cover tunes. We played some parties and roller rinks with different singers calling ourselves The Mob, but was not satisfied with that direction. We then met Geoff Tate, and asked if he would be interested in recording a demo of some original tunes. In the late summer of 1982 we recorded four songs during the graveyard hours at Triad Studios in Redmond, WA. We played the tape for the owner of Easy Street Records and agreed to have the tape sent to various sources. A magazine in the UK calledKerrang! gave us a great review and the phone calls started coming. We decided to press a small amount of EPs on our own label, called 206 Records. We then signed a deal with Harris Management, quit our day jobs and changed the name of the band to Queensrÿche. The rest is just a work in progress.. 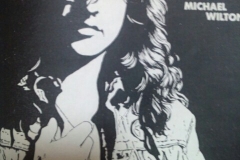 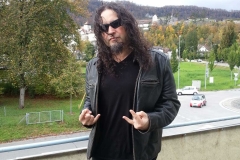 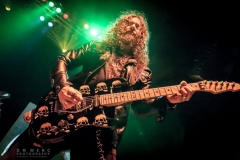 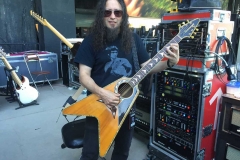